Crystal Alegria is the Director of The Extreme History Project. She has worked in public history for over 20 years and loves bringing history to the public, especially through walking tours. She has a M.A. in History from Montana State University and has worked in a variety of museums, historical societies, and co-founded The Extreme History Project.

Elizabeth Noonan, originally from Chicago, has called Montana home for almost 25 years. She fell in love with the history of Bozeman after “discovering” Robert Redford’s footprints on North Wallace. Other discoveries include Bozeman Creek, which runs through downtown, and the original name of Wilson Avenue. When not rediscovering Bozeman she is a baker, teacher, and improviser. 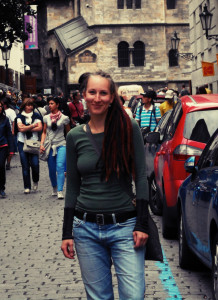 ulia Strehlau Jacobs is a 31-year old German native who just recently moved to Bozeman. She earned her Bachelor’s degree in American Studies from the University of Leipzig, and her Master’s degree in Anglo-American Literature, Language and Culture from the Martin-Luther-University Halle-Wittenberg in Germany. As a foreign exchange student to MSU she explored courses in the History as well as the Native American Studies departments in 2011/12. She returned to Bozeman in the winter of 2014 to research on the Crow tribe and visited the Crow reservation. American culture and history have always been part of her journey. These became passions and hopefully will develop into a career. Traveling, hanging out with friends and being around family are Julia’s free time activities. She also loves riding her bike, listening to music, and being out in nature. 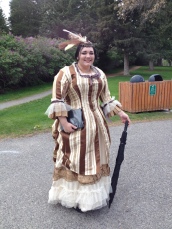 Jessica grew up in Bozeman, Montana and is currently an Anthropology student at Montana State University. When not studying, Jessica enjoys making historical costumes. She specializes in clothing from the Victoria era.

Cheryl Hendry is a PhD Candidate in History at Montana State University.  She has a variety of experiences working in public history.  Prior to returning to school she worked as a seasonal employee for the New Jersey State Park system giving tours of historic Batsto Village, as an Education Assistant at Fonthill Museum, and as a historian for a cultural resources management firm working on issues of historic preservation.

John Olson volunteers for us as our Project Coordinator in charge of working with the speakers involved with the Extreme History Project Lecture Series and helping with our various websites. John is an anthropology major and is particularly interested in archaeology.  He is also pursuing a minor in GIS. This is his first year as a tour guide and he is especially excited that his first tour will be “Murders, Madams and Mediums”.  John is also a member

< Previous Next >
+ Add your own event Eventbrite